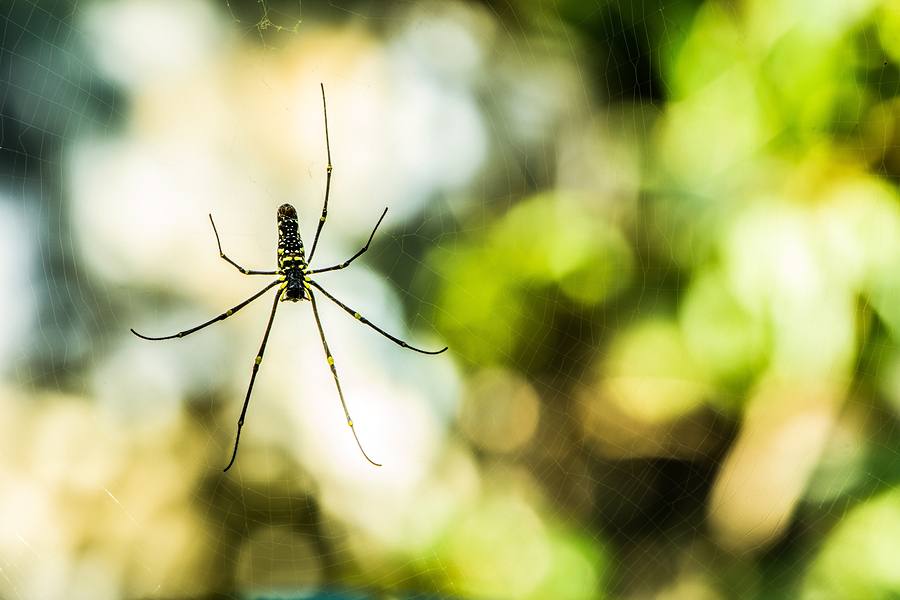 Are the spiders you commonly encounter around your home harmful or harmless? Keep reading to find out which ones you should avoid.

Venom toxicity – the brown recluse venom can cause significant injury with tissue loss and necrosis.

Habitat – brown recluse is found in the United States from the east to the west coast, with predominance in the south.

Spider Identification – an adult spider is 1/4 to 3/4 inch in body – a dark violin shape is located on the top of the leg attachment region with the neck of the violin pointing backward toward the abdomen. Unlike most spiders that have 8 eyes, the brown recluse has 6 eyes arranged in pairs – one pair in front and a pair on either side. Venom toxicity – the Back Widow Spider can inflict a painful bite which can be fatal, especially to the young and elderly. An effective anti-venom was developed in 1956. Only a small amount of venom can cause serious illness, as the poison attacks the nervous system. Systemic envenomisation usually results in headache, nausea, vomiting, abdominal pain, pyrexia and hypertension. The pain around the bite area can be excruciating or it may go unnoticed. First aid and medical attention should be sought as soon as possible, if bitten. If you have heart condition or other heart problem, you may need hospitalization.

Habitat – prefers woodpiles, rubble piles, under stones, in hollow stumps, sheds and garages. Indoors it can be found in undisturbed, cluttered areas in basements and crawl spaces.

Spider Identification – the body of an adult black widow is about 1/2 inch long. The female black widow is normally shiny black, with a red hourglass marking on the underside of the abdomen. The marking may range in color from yellowish orange to red and its shape may range from an hourglass to a dot. Venom toxicity – although the bite of the hobo spider is initially painless, the bite can be serious. After 24 hours, the bite develops into a blister and after 24-36 hours, the blister breaks open, leaving an open, oozing ulceration. Typically when the venom is injected, the victim will experience an immediate redness, which develops around the bite. The most common reported symptom is severe headache. Other symptoms can include nausea, weakness, fatigue, temporary memory loss and vision impairment. In any case, first aid and medical attention should be sought, if bitten, as and when any adverse health effects are observed.

Habitat – they can be found anywhere in Washington, Oregon, Idaho, Montana, Wyoming, Utah and Colorado. They rarely climb vertical surfaces and are uncommon above basements or ground level.

Spider Identification – they are brown in color and the adults measure roughly 1/3 to 2/3 inch in body length and 2/3 to 2 inches in leg span. Their abdomens have several chevron shaped markings. Males are distinctively different from females in that they have two large palpi (mouth parts) that look like boxing gloves. Females tend to have a larger and rounder abdomen when compared to males. 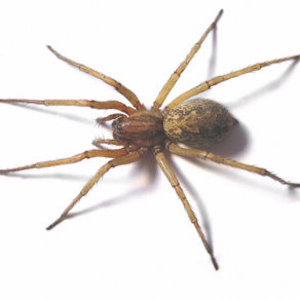 Venom toxicity – the bite of these spiders is of low risk to humans.

Habitat – These spiders are often called grass spiders because they construct their webs in tall grass, heavy ground cover and the branches of thick shrubs. Rarely will a funnel web spider be seen indoors, except for an occasional wandering male. They are found mostly in the Pacific Northwest states.

Spider Identification – are common outdoors and are occasionally found indoors. They are generally brownish or grayish with light and dark stripes near the head. They have long spinnerets and are moderate-sized (3/4 inch long). Grass spiders construct a large sheet web with a funnel they use as a retreat. These webs are commonly built on the ground, around steps, window wells, foundations, and low shrubs. 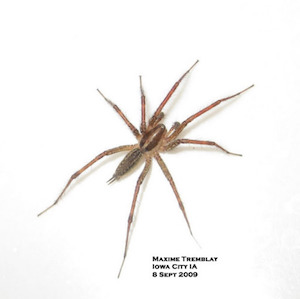 Venom toxicity – known to cause severe illness, especially to young children – similar to Red-Back Spider. Although normally not aggressive, the male mouse spider will bite if provoked, and should be considered dangerous to humans. It has large hard fangs which can cause a deep painful bite. First aid and medical attention (ambulance) should be sought as soon as possible.

Habitat – Mouse spiders are ground dwellers with burrows of more than 3 feet deep. The male often wanders about during the day on open ground, especially after rain, in search of females.

Spider Identification – a medium to large spider of up to 1 and 1/2 inches in body length. The male Mouse Spider often has a bright red head and elongated fangs. 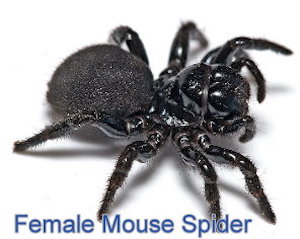 Venom toxicity – the bite of the Black House Spider is poisonous but not lethal. Certain people bitten experience severe pain around the bite site, heavy sweating, muscular pains, vomiting, headaches and giddiness. First aid and medical attention (ambulance) should be sought as soon as possible.

Habitat – this spider spins a lacy, messy web and is prefers dry habitats in secluded locations. It is commonly found in window framing, under eaves, gutters, in brickwork, sheds, toilets and among rocks and bark. Electric lights attract their prey – moths, flies, mosquitoes and other insects.

Spider Identification – adults are about 1/2 inch in body length and of a dark brown to black velvet textured appearance. 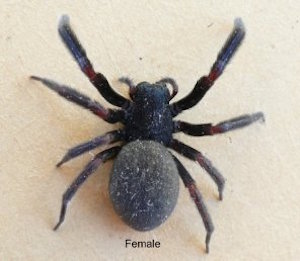 Venom toxicity – the bite of the Wolf Spider is poisonous but not lethal. Although non-aggressive, they bite freely if provoked and should be considered dangerous to humans. The bite may be very painful. First aid and medical attention should be sought as soon as possible, particularly as to children or the elderly.

Habitat – this spider is a ground dweller, with a burrow retreat. It has a roving nocturnal lifestyle to hunt their prey and can move very rapidly when disturbed. Commonly found around the home, in garden areas with a silk lined burrow, sometimes with a lid or covered by leaf litter or grass woven with silk as a little fence around the rim of the burrow.

Spider Identification – an adult is 1/2 inch to more than 1 inch in body length – mottled gray to brown in color, with a distinct Union Jack impression on its back. The female carries it’s young on its back.

Venom toxicity – the bite of the Trap-Door Spider is of low risk (non toxic) to humans. It is a non-aggressive spider – usually timid but may stand up and present it’s fangs if harassed. Rarely bites – but if so it can be painful.

Habitat – this spider is a ground dweller, with a burrow retreat lined with silk of up to 10 inches in depth and around 1 inch in width – prefers nesting in drier exposed locations – often has a wafer-like lid on the burrow entrance. Trap-Door Spiders are commonly found in the drier open ground areas around the home.

Spider Identification – an adult is about 1 and 1/2 inches in body length – brown to dark brown in color – heavily covered with fine hairs. The male has distinct boxing glove-shaped palps, that is, the two “sensory feelers” at front of its head. 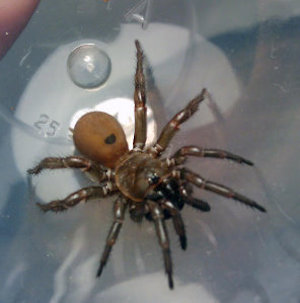 Venom toxicity – the bite of Orb-Weaving Spiders is of low risk (not toxic) to humans. They are a non-aggressive group of spiders. Seldom bite. Be careful not to walk into their webs at night – the fright of this spider crawling over one’s face can be terrifying and may cause a heart attack, particularly to the susceptible over 40 year olds.

Habitat – often found in summer in garden areas around the home – they spin a large circular web of 6 feet or more, often between buildings and shrubs, to snare flying insects, such as, flies and mosquitoes.

Spider Identification – an adult is about 2/3 to more than 1 inch in body length – has a bulbous abdomen – often colorful – dark to light brown pattern. The common Golden Orb-Weaver Spider has a purplish bulbous abdomen with fine hairs. 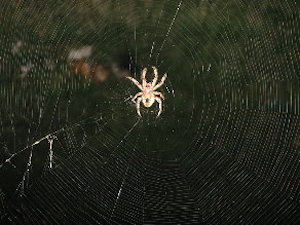 Venom toxicity – the bite of the St Andrews Cross is of low risk (non-toxic) to humans. They are a non-aggressive group of spiders.

Habitat – this spider is a web-weaver usually found in summer in garden areas around the home. It is considered beneficial as it spins a large web to snare flying insects, such as flies and mosquitoes.

Spider Identification – adult 1/4″ to 1/2″ in body length – abdomen striped yellow and brown – as illustrated. The St Andrews Cross Spider usually sits, upside down, in the middle of its web forming a cross. Venom toxicity – the bite of Huntsman Spiders is of low risk (non toxic) to humans. They are a non-aggressive group of spiders. However, a large individual can give a painful bite. Beware in summer when the female Huntsman Spider is guarding her egg sacs or young.

Habitat – a hunter that prefers to live under the flaking bark of trees, under flat rocks and under eaves or within roof spaces of buildings. The Huntsman Spider often wanders into homes and is found perched on a wall. It is a shy, timid spider that can move sideways at lighting-fast speed when disturbed.

Spider Identification – an adult varies greatly around 1/2″ in body length – has long legs – the diameter of an adult including legs may reach 2″ – the first 2 pairs of legs are longer than rear two – it is hairy – buff to beige brown in color, with dark patches on the body. 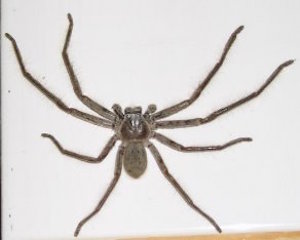