5 Signs of Moles in Your Yard 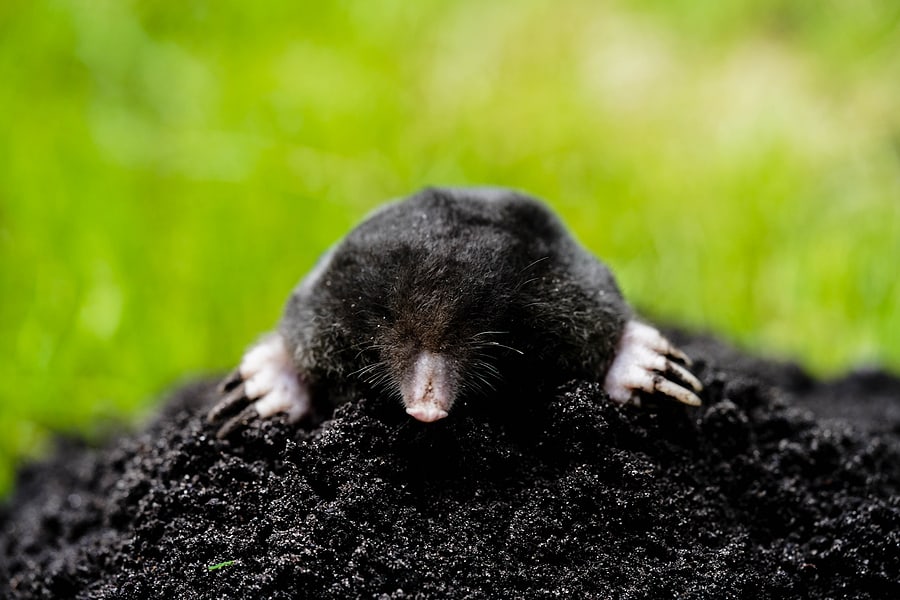 Moles can destroy your perfectly manicured lawn in a matter of days. These small, burrowing insectivores can be found in North America, Europe, and Asia. While they don’t actually eat plants and roots, their burrowing causes significant damage to both lawns and flower beds. Moles can dig up to 18 feet per hour and are most active in early morning and evening.

Moles are small in size, ranging between 4 and 11 inches in length and weighing up to 8 ounces. They are most notable for their long, thin, hairless snouts, small eyes, and lack of external ears. They are usually greyish-brown in color. Moles have large, powerful front feet with webbed toes that they use for burrowing underground while their hindfeet are narrow with slender claws. Moles are nearly blind but they make up for their lack of vision with an exceptional sense of smell.

Moles come into your yard in search of one thing – food! Their diet consists primarily of earthworms and grubs but they will eat other soil-dwelling insects, as well. Moles leave behind a trail of damage when they burrow in your yard, leaving visible trails and brown patches and holes in your lawn. Their tunnels cave in easily, leaving you at risk for injury when you step on them.

Some of the most common signs of moles in your yard are:

Because moles live underground they can be extremely difficult to prevent. The best treatment for moles is targeted elimination usually through trapping or baiting. It is also important to treat existing tunnels so new moles don’t replace the previously removed moles.

If you have a problem with moles or any other pests, contact your local pest control company who can properly assess your situation and treat it appropriately.

How to Prevent Little Black Ants

What Threat Do Rodents Pose To Humans?