Which Snakes Are More Active In The Fall?

Fall will soon be upon us! As the temperatures cool down we want to get outdoors and enjoy the milder weather at the turn of the season. But BEWARE! Snakes are also active during this time of the year. Most snakebites occur between April and October when the weather is still warm and outdoor activities are popular. Fall is breeding and hatching season which makes males more aggressive as they are trying to get the attention of female snakes. Newly hatched snakes are also aggressive as they are trying to avoid predators. Snakes are also preparing for hibernation or brumation (where they don’t actually sleep but instead slow their metabolism to acclimate to the cooler temperatures) which makes them more active during this time of the year. Here are some common snakes you may encounter in southern states and what you can do to keep them away from your home.

COMMON SNAKES IN THE SOUTHEAST: Black racers are large snakes (usually over 5 feet long). They are slender and solid black in color, although some may have a white chin. They are often mistaken for other large, black snakes. Juveniles look completely different, usually gray in color with darker blotches. They tend to flee quickly when threatened. They are found throughout the eastern US. They can be found in any habitat but are more common in old fields, near forest edges, and the edges of wetlands. They are non-venomous but may bite if handled. Brown snakes are small (usually only 6-13 inches in length). Most of them are brown in color but they can yellow, reddish, or grayish brown and can have darker spots on their backs. They can be found in wooded areas, near wetlands, and in urban areas. They are not found in areas of high elevation. They like to live under debris in residential areas or any other area with enough groundcover. They are non-venomous but may bite if handled. 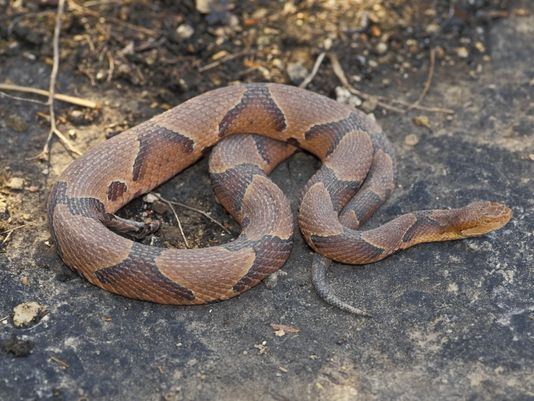 Copperheads are large snakes (usually 2-4 feet long). They have a distinctly triangular shaped head. They are tan to brown with darker hourglass shaped bands on their bodies. Juvenile copperheads have a distinct yellow-tipped tail. They are found in semi-protected areas like woods and swamps but may also be found in urban areas. They are found throughout the central and eastern US, with the exception of some parts of South Georgia and the entire state of Florida. They are venomous and may bite if they feel threatened. Coral snakes are medium sized (1.5 to 2.5 feet long). They are brightly colored red, yellow, and black. If they feel threatened, they will lift up their tail and curl the tip over. Although they spend the majority of their time underground, they can be found in pine and scrub sandhill habitats, hardwood forests and pine flatwoods, and in suburban areas. They are found throughout much of the southern coastal plain, although they are most common in Florida. They are venomous and may bite if they feel threatened.

Garter snakes are small to medium sized (1.5 to 4 feet long). They have dark colored bodies with three yellow stripes running vertically. They prefer protected areas such as woods or marshes but are also common in grassy areas and around water. They are very common in suburban areas as long as there is adequate cover for them. They are common throughout the Southeast and most of the US. They are non-venomous but may bite if handled. King snakes are large snakes (3-4 feet long). They are a shiny black color with white or yellow bands. They have a rectangular looking head with a short, blunt snout. They are found in protected areas such as woods, overgrown vegetation, and cluttered areas. They are found throughout the southeast US. They are non-venomous but may bite if handled or threatened. Rat snakes are large snakes (most 3-5 feet long but some longer than 6 feet). Their coloring depends on the region they live in and can be black, yellow with stripes, or gray with darker patches. They are found in semi-protected areas such as woods, overgrown vegetation, swamps, or abandoned and vacant buildings. They are found throughout the southeast US. They may climb for food. They are non-venomous but may bite if handled or threatened.

Water moccasins are also known as cottonmouths. They are large snakes (2-4 feet long). Their color varies from solid brown to yellow with dark crossbands. Juveniles have a yellow-tipped tail. Their head is distinctly triangular. When threatened they have a characteristic display with their head in the middle of their coiled body and their mouth wide open. They are found in freshwater habitats, cypress swamps, river floodplains, and heavily vegetated wetlands. They are found throughout the southeast US but are more common in coastal regions. They are venomous snakes and may bite when threatened.

HOW TO AVOID SNAKES

While it is impossible to prevent snakes, there are things you can do to avoid them and prepare yourself and your family when you are enjoying the outdoors. Check out these 10 tips to avoid snakes: