What Is A Cicada Killer? 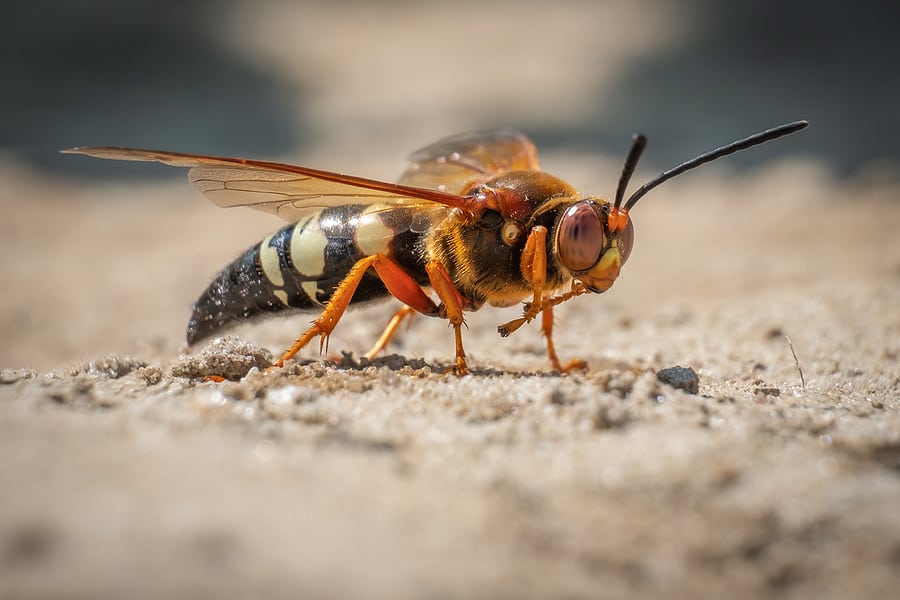 Cicada killers, aka cicada killer wasps or digger wasps, are solitary wasps that appear during the summer months. These wasps are often mistaken for hornets or European wasps because of their similar appearance. Although they are large and intimidating in appearance, they are not aggressive like other wasp species. In fact, they are considered beneficial because they pollinate plants.

Cicada killers can be up to 2 inches in length, although males are smaller than females. They have black abdomens with yellow markings and orange-tinted wings. They are often mistaken for other wasp species, hornets, and even murder hornets.

Cicada killers are attracted to flowers and feed on nectar. They are beneficial to have around because they are considered pollinators.

Cicada killers are found in every state east of the Rocky Mountains. They usually emerge in the summer months. These insects dig holes or burrows to live in that can be up to 10 inches deep and 6 inches wide. They prefer soft, sandy, well drained soil and are often found on sloped terrains, in flower beds, at patio edges, along sidewalks, and in sparse yards. As they dig they push piles of soil up and out of the burrow entrances. Piles of soil at holes are a sign you have cicada killers in your yard. Burrows can have up to 20 cells with 1 to 2 adults and 1 egg per cell. These wasps breed rapidly and populations can grow quickly. Cicada killers can be found in areas of full sunlight near anywhere cicadas are found.

Cicada killers are not aggressive like other wasps, although males will dive bomb if they feel that they or their territory is  threatened. Only females are equipped to sting and will use their stingers to inject venom into cicadas to paralyze and kill them. They then feed the dead cicadas to their larvae. They usually only sting humans when they become caught in their clothing or are picked up by bare hands.

Cicada killers don’t pose too much of a threat to humans and are best left alone. Because they are so unsightly and can often cause fear or panic, some people would prefer to get rid of them. Because they prefer digging in sparse vegetation, keep your lawn turf thick and well maintained to help discourage them. You can also apply insecticidal dust in and around the burrow entrance. Make sure to read and follow the directions carefully on the product label. Finally, you can contact a pest control company who can safely eliminate them from your yard.

Do Snakes Come Out In The Fall?

Palmetto Bugs and Cockroaches: Are They the Same?