9 Common Spiders To Look Out For This Fall Spider sightings tend to increase when the weather cools off. While most spiders prefer to live outdoors, a few will make their way inside in search of food and water. Most spider species also mate in the fall, increasing the numbers we see as they go in search of their partner. Young spiders are born in the spring, taking the summer to grow and mature. By fall they are bigger, venturing out and starting to build their webs. All of these factors combine to increase the number of spider sightings we see near the end of the year.

There are many types of spiders common to this area, some venomous but most harmless. Here are 9 of the most common spiders in Georgia to look out for this fall. Joro spiders are a non-native species originating in Asia that were first spotted in Georgia in 2014. Since then they have started to expand their population throughout the southeastern United States. Joro spider eggs hatch in late spring, with sightings as early as May. They will build their webs anywhere they can find, including decks, porches, houses, plants, landscaping, etc. They are larger than most other spider species in the US. Females can measure up to 4″ in length with males only reaching about 1/4″ in size. Their colors vary – males are usually brown while females can be blue-gray or yellow with red markings on their abdomen and black legs with yellow bands. They are commonly found on the edges of woods and around homes. They are not usually seen indoors and their bites are rare. There is no research to show that Joro spiders are dangerous to humans. 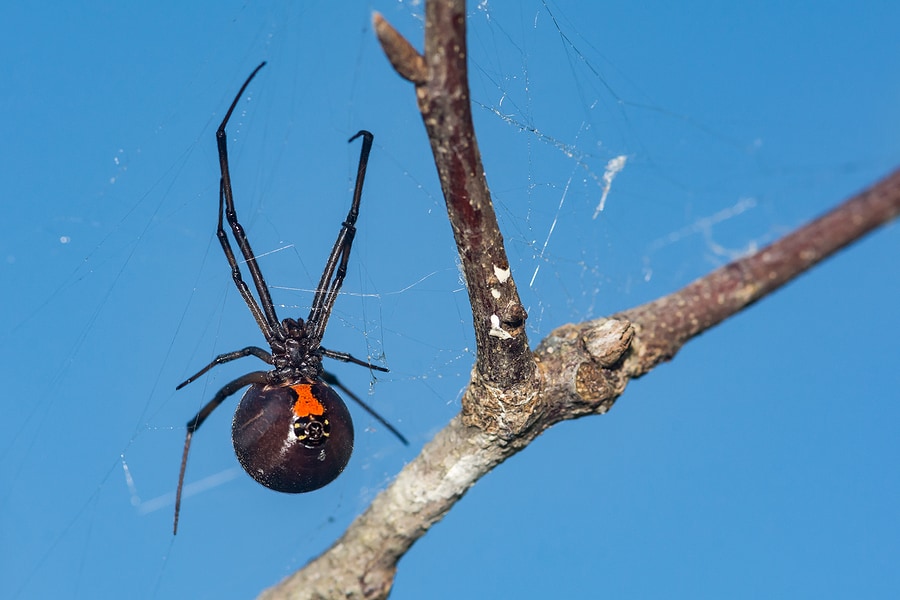 The black widow is one of the few structure-invading species of spiders in our area. Their fangs are big enough to penetrate human skin and their venom is powerful enough to cause side effects in humans. In fact, they are the most venomous spider in North America. Antivenom for their bites does exist. Female black widows grow to lengths of 3/4″ while males are about half that size. They are one of the easiest types of spiders to spot with black bodies and distinctive red hourglass markings on the underside of their abdomen. They have very round body shapes. These spiders can be found indoors and outdoors, preferring protected, sheltered areas to live in. They are most active at night, spinning webs to catch their prey in. Outside they can be found around decks, in barns and outbuildings, under rocks, or in woodpiles. Inside they can usually be found in areas that aren’t disturbed or used frequently, such as garages, basements, closets, and crawlspaces. Brown widow spiders are another non-native species, although can now be found throughout the southern and western United States. Bites from the brown widow aren’t as potent as those from their black widow cousins and don’t cause nearly as bad of side effects. Only brown widow spiders bite. Brown widows also prefer undisturbed areas to live in but can often be found in garages and basements, gardens, on patio furniture, on mailboxes, on outdoor toys, and in storage closets. Female brown widows grow to about 1/2″ long while males are about half this size. Both males and females are brown in color with tan and black legs. They also have the hourglass marking like black widows, but theirs are orange in color. Brown recluse spiders are commonly found in the southeastern and midwestern United States. They are also easily identifiable by the distinctive markings found on their bodies. These spiders are known for “secretive” behaviors, preferring to hide in warm, dark, dry habitats. They are commonly found in woodpiles, basements, and closets, especially in old shoes that aren’t worn often. They will bite, with symptoms taking up to 3 hours to show up afterwards. Brown recluses range from 1/4″ to 1/2″ in length. They are tan to dark brown in color with a dark fiddle-shaped marking on their back. 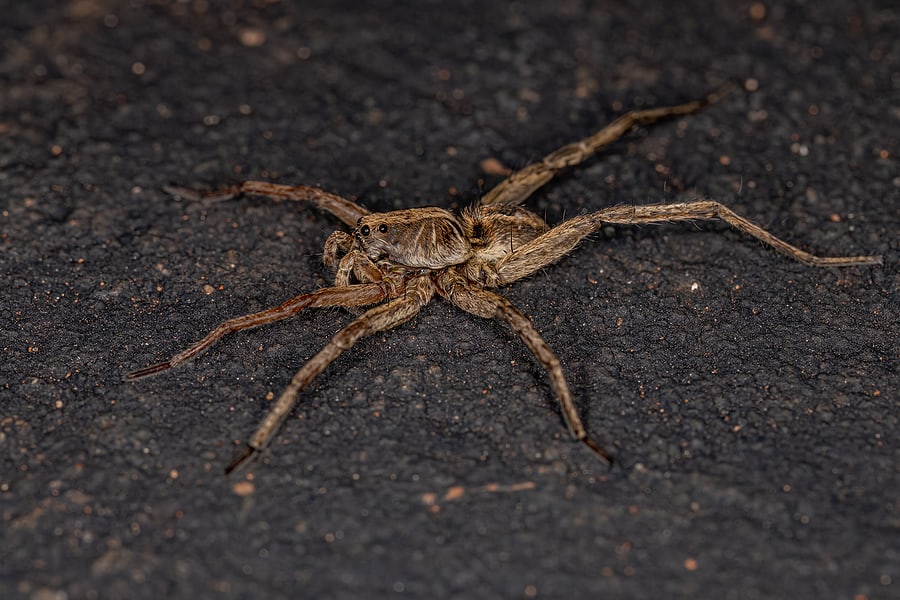 Wolf spiders are another common species you may see this fall. These spiders don’t use webs to catch prey; instead they hunt their prey, utilizing their speed to catch them. There are over 100 species in the US and Canada. Female wolf spiders grow from 3/8″ to 1-3/8″ in length while males range from 1/4″ to 3/4″. They are usually dark brown or yellow with striped markings on their legs. They are also very hairy. Wolf spiders hunt at night and hide out during the day. Once inside, they usually stay at lower levels and are often spotted in the floor along walls and under furniture. Outside they are found in woodpiles, under rocks, and other sheltered areas of landscaping. They can be beneficial to have around because they eat other pests that can cause problems around your home. They can bite but it is extremely rare. The common house spider gets its name from the fact that it is commonly found inside homes. These spiders are commonly found worldwide. They don’t pose a threat to humans and are more of a nuisance pest. Their webs in your home are the biggest issue they cause. Female house spiders grow from 3/16″ to 5/16″ in length while males range from 1/8″ to 3/16″. They are yellowish-brown in color with dirty white abdomens and dark stripes that meet at an angle. 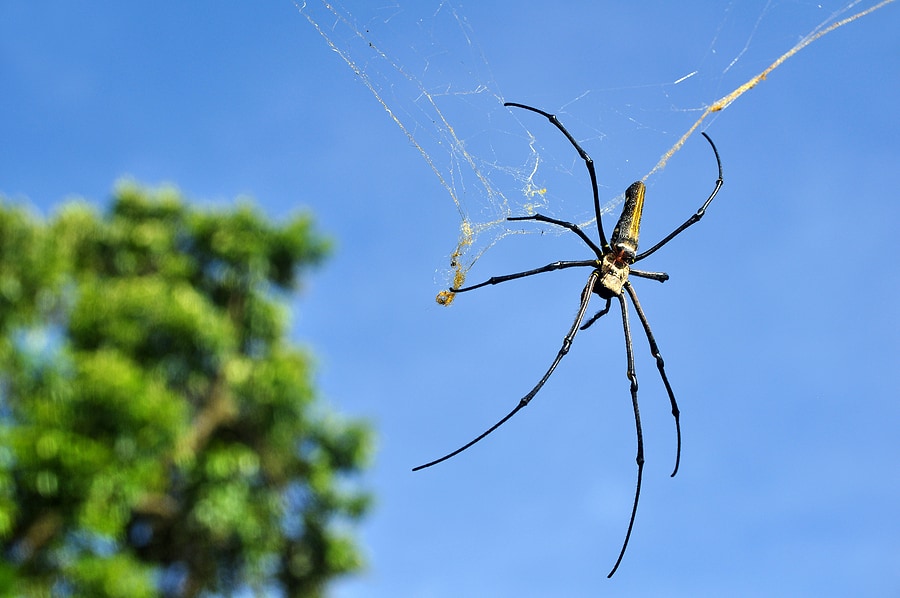 Orb weaver spiders are named for the orb-shaped webs they create. There are over 2800 species of these spiders worldwide. Adults range in size from 1/2″ to 1″. Their coloring varies greatly among species; they are mostly reddish-brown to gray but some varieties are a vibrant yellow color. Because there is such variation among species, the best way to identify an orb weaver is by it’s large, circular, wagon-wheel shaped web. Orb weavers don’t pose any threats to humans but their large webs can be problematic around your home. 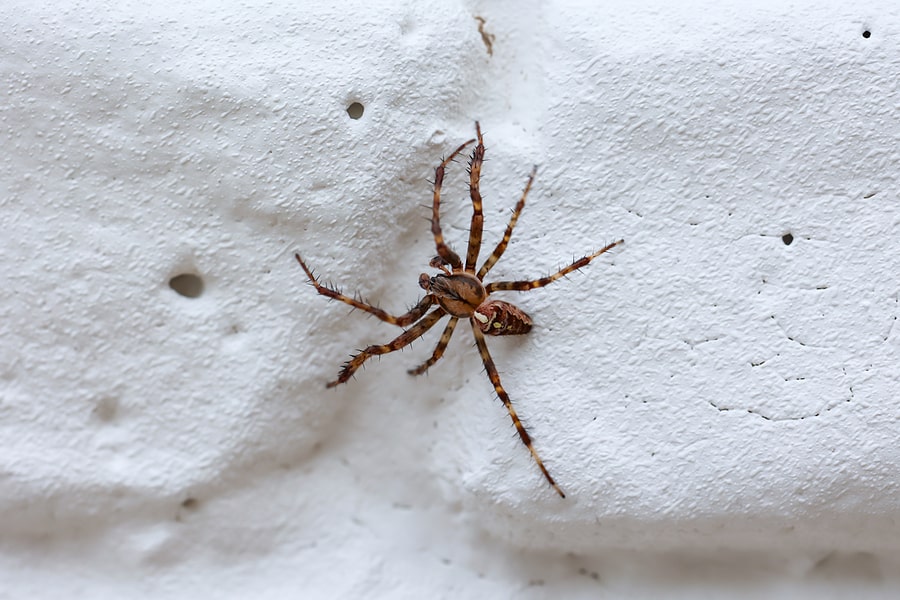 The crevice spider, also known as the southern house spider, are commonly found in the southeastern United States. They are often mistaken for brown recluse spiders. They range in size from 1/2″ to 3/4″. Males are usually brown or amber in color while females are black or gray and resemble tarantulas. They prefer to build their webs at higher elevations and are usually found on the outside of houses, outbuildings, and barns. They are known to crawl across anything in their path, including humans! They do not pose a threat to humans, however. Once you’ve identified the spider(s) you have around your home, the next step is preventing them. You can prevent spiders by:

American Cockroaches: How To Identify and Prevent

Are Mosquitoes Still Active in the Fall?

What Attracts Centipedes To Your Home?

7 Signs You Have Cockroaches