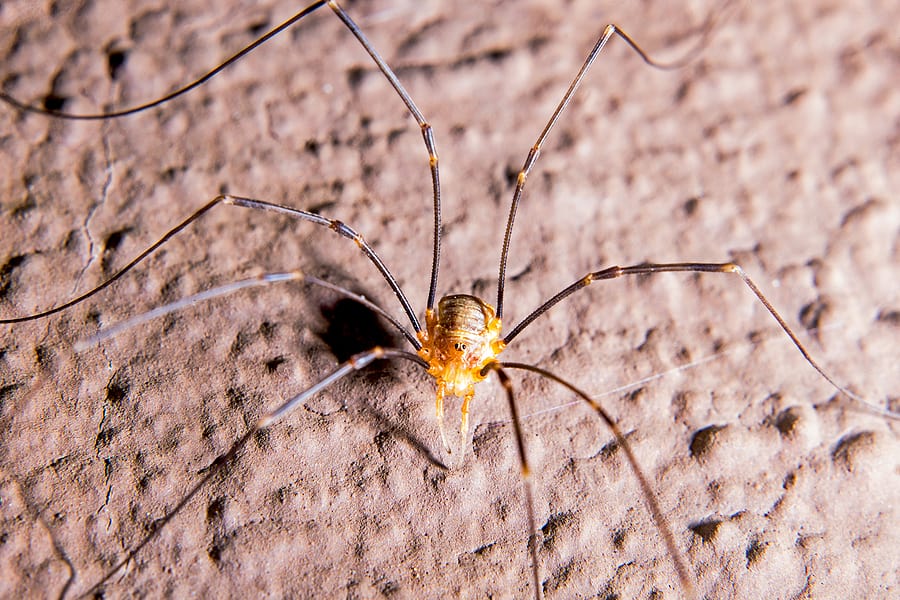 Daddy long legs, also known as harvestmen, belong to the arachnid family but they aren’t, in fact, spiders. They are cousins of spiders, mites, and scorpions. There are several differences between harvestmen and spiders. One of the most prominent is that harvestmen have one pair of eyes while spiders have 8 pairs of eyes. Harvestmen also cannot spin silk to make webs, so they can’t capture their food like spiders do. They have to ambush their prey instead.

Daddy long legs are omnivores and mostly eat spiders, earthworms, and other insects. When their food supply is limited, however, they will scavenge for whatever they can find like dead insects, insect eggs, and even decaying plants. In fact, these creatures are considered beneficial to have around your house and garden because they eat both garden and household pests.

Harvestmen prefer dark, moist environments so they are most often found in basements, crawlspaces, and garages. They have a unique ability to escape their predators by two different means: they can detach their legs (which will continue to twitch for up to an hour after they fall off) to trick their predators and escape; and they can also secrete a foul-smelling, bad-tasting chemical to deter their attackers.

Now you’ve found a daddy long legs inside your house. Should you be worried? Are these pests poisonous? It is important to distinguish the difference between poisonous and venomous. Poisonous pests cause harm when they are touched or ingested. Venomous pests cause harm by injecting venom through a bite. Although harvestmen do have fangs (also called chelicerae), they are primarily used to grasp and chew food. These arachnids are not known to bite humans and are not considered dangerous to either the health or structure of your home.

Because harvestmen are considered beneficial pests, it’s ok to leave them be if you find them lurking around your house. If you just can’t stomach the thought of sharing your personal space with them, the best way to get rid of them is to sweep or vacuum them up. If you have a problem with any other pests, contact a professional pest control company for a thorough evaluation and pest control plan.

How to Easily Deter Snakes Away from Your Property