When Is Lovebug Season?

This time of year you may have noticed those pesky black and red bugs flying around, especially while driving your car. These lovebugs, also known as honeymoon flies, kissing bugs, and double-headed bugs, are actually a type of march fly. They are an invasive species that came over from Central America and have now taken over the entire gulf coast, as well as all of Florida, Georgia, and South Carolina. So what should you know about these pests and when does lovebug season end?

Lovebugs are always around but because they spend most of their lifespan as larvae, we don’t notice them as much. We do see them more often during their swarming season which happens twice a year: once in late April and May and again in late August and September. During this time they mate which is why you usually see two of them attached while they’re flying.

Adult female lovebugs only live for 3 to 4 days during mating season. They connect to a male and must stick together at all times during this process. It can take up to 24 hours for the mating process to be complete. Males will swarm in areas they know females will be near. The females then fly into these swarms, which are commonly seen in the morning (around 8:00 to 10:00 am) and the late afternoon/evening (around 4:00 to 5:00 pm).

Lovebugs are attracted to exhaust fumes from cars, lawnmowers, and other engines. They are also attracted to heat and light colored surfaces. For these reasons they are especially common near highways and other high traffic areas.

While they can be a nuisance, lovebugs can actually be beneficial to have around. Lovebug larvae convert plant material into organic substances that the plants then use as a food source. They are difficult to get rid of as pesticides are ineffective against them and they have very few natural predators. Lovebugs aren’t dangerous to humans. They cannot bite or sting, cannot transmit diseases, and aren’t poisonous. They will leave white splatter on your vehicle, which are actually their eggs.

While there isn’t much you can do to prevent lovebugs, there are a few things you can try to help make lovebug season more manageable.

Look Out for These Fall Nuisance Pests

The 411 on Termite Inspections

How to Continue Caring for Your Lawn in the Fall 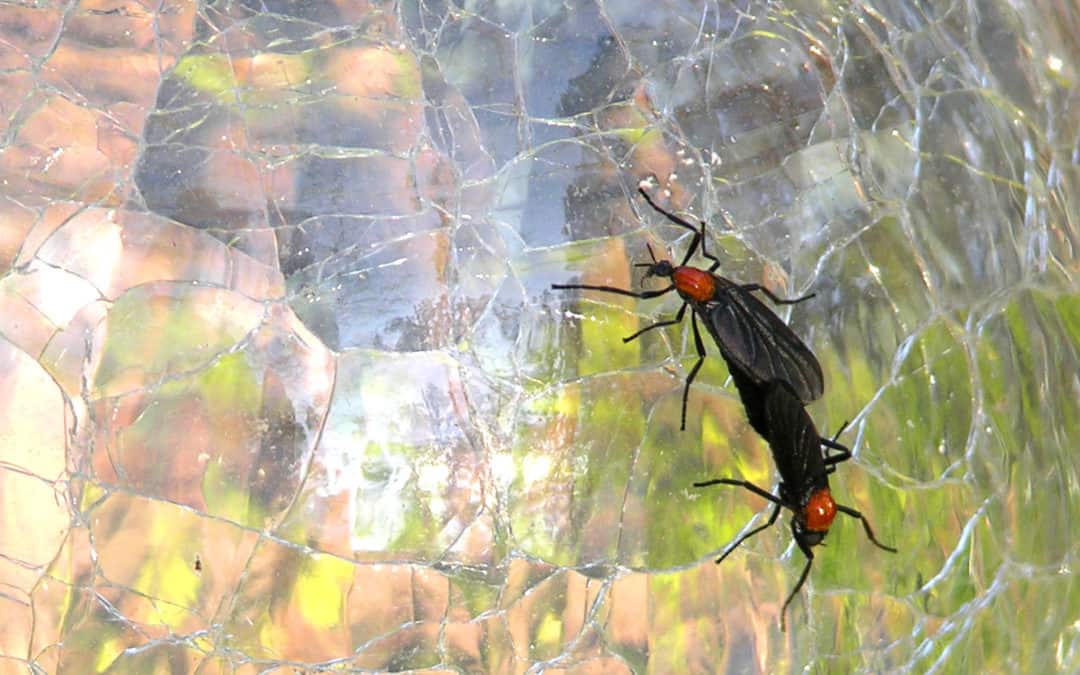 The love bug (Plecia nearctica), also known as the honeymoon fly and the double-headed bug, is not actually a bug at all. It is actually a species of march fly and more closely related to biting midges and mosquitoes. These nuisance pests are found in parts of Central America and the Southeast United States, especially along the Gulf Coast.

Love bugs are small, about 1/4″ in length with black bodies and red heads. While it is very rare to see them in larval form, adult love bugs are very recognizable as they are almost always seen as a pair, with the male and female joined tail to tail. So why are the love bugs stuck together? The answer is simple. They are mating. Adult females will emerge and live 3 to 4 days, just long enough to mate before they die. Because of this, they must stick together at all time.

There are 2 major flights of love bugs during the year. The spring flight is usually from April to May and the summer flight is from August to September. Each flight lasts about 5 weeks.

While love bugs can be extremely annoying, especially if you are driving in the southern states, they are not capable of biting or stinging and pose no health threats to humans or other animals. They are also not known to transmit any diseases. They do cause other problems, however. Love bugs are attracted to the gas that is emitted from automobiles and will often congregate in large numbers near highways. This causes them to be killed in large numbers on car hoods, grills, and windshields. If left for too long, dead love bugs can cause damage to car paint, obstruct windshields, and even clog radiator passages and grills, causing mechanical issues and engines to overheat. These pests also thrive in humid environments so they can be found in basements, attics, and storage rooms, and even on flowers or in flower beds with high moisture content.

While your best bet is to just let them run their course, there are a few ways you can eliminate love bugs or deter them from your car or home.

While love bugs don’t pose any significant threat to humans, they can be a nuisance. If you have an issue with love bugs or any other pest, contact a professional pest control company for assistance.

Keeping Wildlife in the Wild

How to Identify 5 of the Most Common Cockroaches in Georgia

Avoid Bites and Stings this Summer

What Are These Black and Red Bugs Around My House?

You may have walked outside recently and come across a congregation of small black and red bugs either on your home or car. These are boxelder bugs or, as they are affectionately called in the south, “lovebugs”; one of the many overwintering pests we tend to encounter when the temperatures drop and take up residence on the south side of homes, vehicles, and rocks where the sun shines in abundance. The question is, should you be concerned?

Let’s break down what “overwintering” means and the process by how it affects bugs and your home. Overwintering is defined as the process of insects passing the winter seasons. In the warmer months, boxelder bugs reside and thrive in boxelder and silver maple trees. There they lay their eggs and feed on leaves and flowers.

Once temperatures start to drop, these bugs will migrate by the thousands out of the trees and take up residence on the south side of buildings and homes. Then, they either migrate to a nearby site to hibernate for winter OR make your home their hibernation spot for the winter season.

So, what’s the risk of a boxelder bug home invasion? While boxelder bugs are not known to bite, they may bite when threatened and puncture the skin, causing a slight irritation and leaving a mark, similar to a mosquito bite. They will also leave a reddish orange stain from their fecal matter that will add discoloration to fabrics when crushed.

How to Prevent and Remove Boxelder Bugs

If you’re having a boxelder bug problem, our Rome Northwest team is ready to help. A professional pest control plan has proven to be effective in controlling these overwintering pests when infested tress and the other areas around your home are treated with a residual pest control product. Schedule a free estimate to get started. Contrary to urban myth, lovebugs, also known as the honeymoon fly, kissing bug, or double-headed bug, are not a result of a University of Florida genetics experiment gone wrong, but a result of their migration into the southeastern states.

During and after mating, adult pairs remain coupled, even in flight, for up to several days.  Lovebug flights usually occur first in late spring, then again in late summer, and extend over periods of four to five weeks.  They are usually restricted to daylight hours, reaching peak activity at 10 am, and can number in the hundreds of thousands.

Lovebugs do not bite or sting, but they can be a nuisance to drivers.  When left spattered on a car, lovebugs can leave damage to the finish of the car.  Soaking the lovebugs in water for several minutes will help with the removal, and to make future removal easier, apply a light film of baby oil over the front of the hood, above the windshield and on the grill of the bumper.